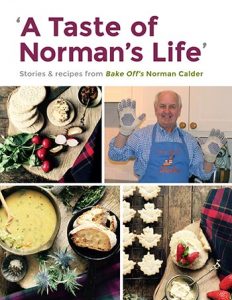 The 67-year-old retired seaman from the Scottish Highlands became a firm favourite with viewers two years ago when he appeared on the hugely popular TV show mixing straight-talk with his sweets and soufflés.

Despite departing 2014’s The Great British Bake Off in round 5 his popularity hasn’t waned, with more than 12,000 followers on Twitter still awaiting his next recipe.

He continues to be in demand for charity chef and baking events.

This month the baker’s son from Portknockie self-published his story, A Taste of Norman’s Life, which perfectly mixes his early years and his time on the BBC1 show with recipes for some of his favourite dishes.

Rather than go round the doors of publishing houses looking for a deal, the former merchant seaman decided to go it alone by self-releasing his book on Kindle.

Norman said: “I always wanted to write down my story for my family to know about my younger years and what I did. I have no idea what either of my grandfathers did and I didn’t want my grandchildren not knowing anything about me.”

“Once I had finished the book I had a look around for a publisher. Some of the companies I approached wanted to charge a fortune and I didn’t think it was worth spending our savings.”

“I read about self-publishing online and when I contacted PublishNation they talked me through everything. The costs were very reasonable and everything was explained. They made it easy and that suited me.”

A Taste of Norman’s Life has been initially published only as a digital Kindle e-book. With further television appearances due at the end of the year, the option of a hard-copy run looks a distinct possibility ahead of Christmas.

He continued: “I liked the idea of the book being available on Kindle and I have also downloaded it onto my iPad. It is much more versatile and, as each chapter has its very own recipe, it is easy to have the electronic book with you in the kitchen or when you are travelling. I will be back on television again later this year, and people in America and Australia are now getting in touch since Bake Off went onto Netflix, so there probably will be enough demand for the book to be printed. It’s an option I have and I’m sure PublishNation will keep me right.”

Much of Norman’s youth was spent in his father’s bakery before he went to sea. By the age of nineteen he had completed tours on three different ships. His adventures on the ocean waves make up the opening sections of A Taste of Norman’s Life along with recipes he collected on his travels. Fans of the Great British Bake Off won’t be disappointed either as he dedicates much of his autobiography to the five weeks of stardom he enjoyed with Paul Hollywood and Mary Berry. He also includes the secrets for making his famous butter biscuits.

Norman added: “Baking has always been an outlet for my creativity. I worked in the bakery when I was a boy but I never wanted to do it as a career. I love baking as a hobby and it is something I have always done. Many of the recipes in the book are from when I was a seaman and visited far off lands.”

‘A Taste of Norman’s Life’ has already proven popular in its first few weeks of publication.

Although self-publishing has been around for years, the advent of digital books has resulted in a revolution in the publishing industry which provides opportunities for writers that were previously either impossible or extremely difficult to achieve. PublishNation has been at the forefront of the digital revolution and helped turn the dream of a published book into reality for hundreds of delighted customers.

PublishNation director David Morrison admits Storming Norman’s biography is the icing on the cake of his company’s successful start to the year. He said: “I thought I recognised Norman’s voice when he initially contacted us as I’m a huge fan of the show.”

“We talked through what Norman wanted for his book and the ways we could help him achieve this, which is how we always work with writers. It’s important that writers are in full control of how their book will be published and we are always conscious of the fact that a book is so important to the person who created it”.

“For Norman, he specifically wanted an e-book, which is a growing trend for people new to publishing. This is something we were delighted to help him with and, as Norman said, working with PublishNation was a piece of cake.”

See ‘A Taste of Norman’s Life’ now on Amazon.

Having finished my book, I decided to self-publish on Amazon but needed help with formatting, cover design and process.  I contacted Gwen at PublishNation following a Google search and am delighted with the outcome.  Gwen helped every step of the way with great patience and the finished product is exactly what I wanted.  Many thanks!

Rosie Cantrell was last modified: February 24th, 2022 by PublishNation
Rosie Cantrell
Diary of a Woman of No Small Importance