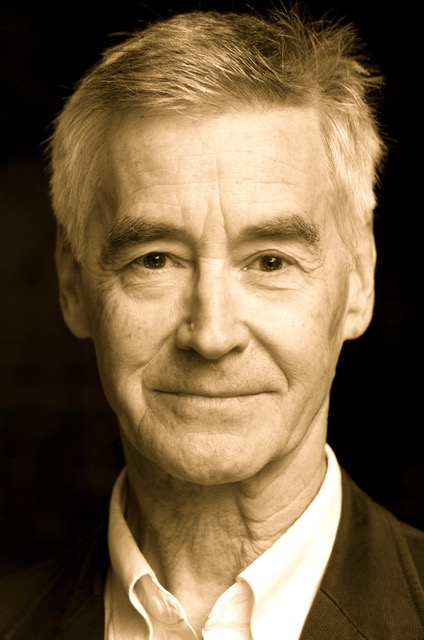 But there have been no hard feelings from the celebrated 73-year-old actor as he has gone on to star in the award-winning period drama.

And now, after teaming up for a second time with PublishNation, he has finally released his first work of published fiction.

The Crimson Pantomime is a highly enjoyable and deeply engaging debut novel set within the deceptive and often unpredictable world of acting.

The convincing and thoroughly gripping narrative is described as being ‘as juicy as a Christmas pudding’ by fellow actor Sir Ian McKellen.

Rupert has appeared in some of the country’s most memorable television programmes, including Foyle’s War, Prime Suspect, and more recently Coronation Street, as well as such epic films as Gandhi and Empire of the Sun.

And he can look back on a theatre career stretching back to 1970, which has seen him share the stage of the Citizens, Royal National, and Royal Court theatres with such greats as Laurence Olivier, Derek Jacobi, Judi Dench, and John Gielgud.

It was following a role beside Gielgud in the 1985 film adaptation of The Shooting Party that Rupert was first drawn towards a writing project.

Impressed with Isabel Colegate’s pre-war novel, he went on to buy the rights to another of her classics, Statues in the Garden.

Rupert’s screenplay adaptation of the country estate drama was well received, but before he could begin pitching to production companies, another pre-war period adaptation stole his thunder.

Rupert explained: “Isabel Colegate expressed her approval of my screenplay adaptation of Statues in the Garden, and everything was looking good, but Julian Fellowes beat me to it by doing Gosford Park.

“There wasn’t room for another drama from a 1930s country estate at the same time.

“Julian, of course, went on to do Downton Abbey after that.”

Rupert had to wait until series six of Downton Abbey to make his appearance as Neville Chamberlain.

Despite his early screenplay setback, Rupert worked with the team at PublishNation to produce his critically-acclaimed family memoir, Relative Times, in 2013.

The beautifully recalled homage to seven members of his family, who had come through colonial and world wars, was seamlessly pieced together with anecdotes of how each in turn had influenced his acting career.

Rupert said: “I have had the most extraordinary life, and I wanted to honour the generations before me who made it all possible and helped me become what I am.

“I have done all of my things on stage or in front of a camera, yet they did a lot of the same things in real life, coming through several wars.

“Relative Times was an act of gratitude.”

Although Rupert did finish a novel in the 1990s, which remains unpublished and securely locked away in a drawer, it was the writing and publishing of Relative Times which provided the confidence to progress on to The Crimson Pantomime.

With the help of a writing group in South East London, and on a mission to right a literary wrong, the father-of-three has spent several years developing his characters and the narrative.

He explained: “I read a novel by someone rather famous about acting and it was terrible – just full of cliches.

“I know what it’s like to be an actor and there is nothing cliched about it – I wanted to introduce the aspects of my profession that are fairly unknown, yet very much real.

“The good thing about the writing group I belong to is that they keep you in your place – we often go home from meetings bleeding.

“I made a good start on The Crimson Pantomime and the writing group told me it could go two ways – an airport novel or something a bit better.”

Thankfully, Rupert’s finished novel is much more than airport fare.

And with help once more from the PublishNation team, it was released during the summer, yet again to critical acclaim.

The Crimson Pantomime probes the blurred lines between reality and illusion, and the psychological challenges that the profession demands.

As well as a being a compelling page-turner of a thriller, Rupert’s novel is a convincing study of the complex layers that make up identity.

Sir Ian McKellen is among the many industry insiders who have been won over by The Crimson Pantomime.

He said: “Rupert Frazer’s tale skilfully leads you into a world where gossip bumps up against melodrama and the wayward passions of his cast – a pantomime perhaps, but as juicy as a Christmas pudding.

“Like the best fiction, it makes you wonder whether it is, in fact, fact.”

On top of the star endorsements, The Crimson Pantomime has also received a string of five-star reviews from other readers since its release.

Reviewer David Austin stated: “… it is a captivating, irresistible story.

“At over 400 pages, it is not a short novel, but it is hard to put down, and it will not leave you for some time after you have.”

Following the initial success of The Crimson Pantomime, Rupert has begun work on an adaptation of Arthur Schnitzler’s influential play, Das Weite Land.

If you have a book idea but feel daunted by formatting/cover design/marketing process, I can highly recommend PublishNation.

Their website is easy to navigate, prices are clearly shown so there are no nasty surprises.

David guided me every step of the way and I couldn’t be happier with the result – ‘One designer clad foot in the grave’. I only wish I’d found them years ago!